In February, I was struggling with making progress on my crime horror visual novel, In Your Nature. It had taken me two and a half months to write about what amounted to the introduction to the story and I felt like I couldn't tell people much about it. I only had two VNs on my page, both made in TyranoBuilder and both not really intended for public audiences outside of the groups they were made for. I had worked in Renpy before, but never completed anything. But NaNoRenO was coming up. I knew I couldn't finish In Your Nature in just a single month but I thought it would be nice to have something complete to show people what I could make.

So on February 28th, about 9 hours before the game jam started, I dug up an old story idea and tossed together some concept sketches and the loosest, vaguest plot outline I thought would be short enough to get done with just me. Truly I am Booboo the fool.

(Colored versions of these concept art pieces are actually unlockable if you get all the endings! Secrets)

I had even watched videos before about NaNoRenO and how to avoid pitfalls for it! But I didn't think the last minute-ness of it would affect me much since I was working by myself and planned to make the story very simple.  Simple...

So with that big mistake out of the way, here's where I went wrong.

1. Writing is hard and slow

I mentioned before what a slow writer I am when it came to my other project . The same thing happened here and at first I thought it was just a me problem in general. And in some ways it was! I'm easily distracted and things like Zen Writer and the like made to force you to focus are helpful for me.  And this will sound like a joke but I actually had a way easier time writing this VN by writing in Textreme 2.

But you know how they say it's hard to write while looking at a blank page? It's because you have to come up with ideas, right? You know what feels pretty similar? Looking at a vague outline that doesn't actually explain what should be happening in a scene or what incites the events the scene is built around. My past self had really screwed my future self by preparing a story outline that was a lot closer to an idea for a story than an actual summary of a story. I wound up barely writing anything for the first half of the month and instead focusing on preparing artwork I was pretty sure I needed.

Write a better outline sounds pretty easy on paper but it's not always that simple. I found a method that worked pretty well for me though and even got me out of serious writers block in some instances. Take your vague outline. Add another layer of outline by adding points between your vague points. Maybe one of these is enough for you to start writing the scene. If it isn't? Keep adding more points between points. You might have to go back and edit to make things make sense (read: you definitely will) but soon you'll have a play by play of the scene you're supposed to be writing. If you outline hard enough, it'll eventually be a scene. Maybe a really clinical version, but fix it in editing.

Like I said in the last point, I spent the majority of the first two weeks on art. I drew characters sprites, I did a background and a half, I did the first CG of the game. I was drawin' up a storm.  I thumbnailed a bunch of CGs that wound up not being in the game. I also started on a couple that wound up cut. And I started on a complex background that absolutely didn't need to be so detailed and I wound up replacing anyway!

Why did I think you needed to be able to see everything in the room?!

While a lot of this worked out for me just because I already knew what kinds of emotions I'd need from characters and there were only three of them, it did cause some extra work down the line. For example,  some expressions I barely used or forgot about because they were similar to other expressions. And others I had to add at the last minute because I realized I didn't have one I needed for a particular scene! I even had to add a button to the menu later because I didn't realize I'd need it for a feature I added at the last minute.

Can you see what's missing here ? I completely lucked out that I had drawn a pointless blank book that I wound up using later! This menu in particular set me back in trying to learn to make it with a slightly outdated tutorial, using up a ton of time when, keep in mind, at this point I didn't even have the full introduction of the story written.

During the second month of production, I really had to talk myself into finishing this thing. I had already done so much work on it! So I wound up looking up some videos about visual novel production and one really managed to hit a chord with me for some reason. This video from VNConf 2022.

And yes, the inspiring part was the Spreadsheet. In the future, I'll definitely want to make this from the start and use it to both keep an eye on the scope of the game and what I actually need. I wound up cutting some things from this game, as well as de-prioritizing certain things. High priority items got more time spent on them and low priority ones didn't. The kitchen was a silly thing to spend so much time on so after considering cutting it entirely, I instead drew a much simpler background for that location. Keep it in perspective!

3. How big is a small game when you're a solo dev?

Had I been a little less impulsive about this, I might have thought to look up other people's past NaNoRenO games. Not every game lists their wordcount, but a lot of them do. Just skimming through some of the completed entries from this year, I see small teams averaging 3,000 to 5,000 words. I see a team of 5 people plus voice actors with around 7,000 words. I jumped into this without even thinking about that nor did I try writing out a scene to see how long they tended to average for me.

Spoiler: Each scene in Don't Toy With Me averages around 3,000 words, to the point I accurately predicted the end wordcount before the final scene was done.  Maybe some solo developers could do what I did in half the time, but I'd say doubling the wordcount of works by  experienced people with five times as much help as me was perhaps a little too ambitious for a game jam! 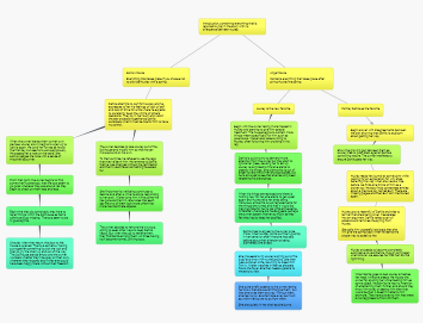 This was my final outline of the events of the story. See that entire left half of the flow chart? That's cut content! The game was planned to have three routes, or I guess more like 3.5 routes. And I still hadn't cut that third route when NaNoRenO ended! Not to mention I also removed multiple CGs I had planned for to make the climaxes of the two existing routes more cinematic. Scope is really hard to gauge for something you haven't made before but this was a real eye opener for me.

The spreadsheet mentioned in the previous part is definitely a big help. I'd say the next most important thing is examining your own workflow. How long does an art piece take you? What about writing? How many words do you need to express a scene and how long are the stories others are writing for similar projects to yours?

To help you don't necessarily need to cut a ton of things out. But don't be afraid to cut things either! I'd like to add the third route eventually as an update, but I now have a finished game out because I didn't wait for that! But you can examine things you're working on. Does that CG really need a full view of the background if the player already knows where it's taking place? Does this background need so much detail for a simple and generic setting? Does this scene need a CG at all if it can be expressed through sprites?

And of course, deadlines! I obviously missed mine, but I used the Queer Games Bundle as a major motivation to get this thing done and out the door. And it worked! Feeling that final week pressing down on me, I managed to shove my way through the last of the work despite feeling doubts about what I was making. It also got me to look at my plan more critically and remove everything that wasn't needed or could be added later without taking away from the experience.

I learned new skills with Ren'py while making this game, and I learned a lot more about project management, even when I'm the only person I'm managing. I feel like I can use a lot of this when I go back to working on In Your Nature. I'll rework my outline to make it more clear and I'll start documenting what I'll need (and what I don't need, to keep the scope of the project in check).

A lot of this probably seems like common sense to VN veterans, but experiencing it is a whole different thing. (As someone who loves to procrastinate by reading and watching content about HOW to do the thing I wanna do, I think my opinion counts in that regard!) So I definitely recommend anyone sitting on a VN idea right now, join a game jam! Find a good reason with a deadline to force it out there and get the experience you'll need to make something even better next time!

You'll feel good about having something complete that you can show people and say "I made this!"

Get Don't Toy With Me

Don't Toy With Me

A short horror visual novel set in a dollhouse

Hey there! There isn't a chapter 2. The update only added artwork for the endings that were already there. I do plan on working on an update that will add one more story route but for now it's not there.

Windows often claims files with unknown publishers to be unsafe. But any file I upload here on itch.io under my account is official and only contains the game! As long as you aren't downloading from some unknown site, it should be fine. 😄👍

The last bit is pretty good advice for me personally (procrastination is my abode,,). Thank you for making both this and the game!

I LOVE THIS GAME AWESOME WORK

(Perfection is peak but time is needed).